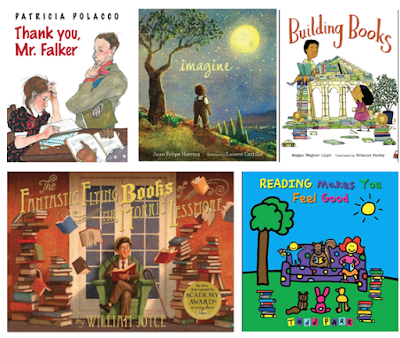 Thank You, Mr. Falker -- Patricia Polacco. Patricia Polacco is now one of America's most loved children's book creators, but once upon a time, she was a little girl named Trisha starting school. Trisha could paint and draw beautifully, but when she looked at words on a page, all she could see was jumble. It took a very special teacher to recognize little Trisha's dyslexia: Mr. Falker, who would not let her fail and encouraged her to overcome her reading disability.

Imagine -- Juan Felipe Herrera
Have you ever imagined what you might be when you grow up? When he was very young, Juan Felipe Herrera picked chamomile flowers in windy fields and let tadpoles swim across his hands in a creek. He slept outside under the starry sky and learned to say good-bye to his amiguitos each time his migrant family moved to a new town. He went to school and taught himself to read and write English and filled paper pads with rivers of ink as he walked down the street after school. And when he grew up, he became the United States Poet Laureate and read his poems aloud on the steps of the Library of Congress. If he could do all of that . . . what could you do? With this illustrated poem of endless possibility, Juan Felipe Herrera and Lauren Castillo breathe magic into the hopes and dreams of readers searching for their place in life.

Building Books -- Megan Wagner Lloyd  (I wanted to find the pix from the woman who designs sculptures with books but didn't find it today. Didn't find that, but found some other cool stuff. Will send the link when I find it.)
The Fantastic Flying Books of Mr. Morris Lessmore (based on the 2011 Short Film) -- view here: https://www.dailymotion.com/video/x3yrl25
The Fantastic Flying Books of Mr. Morris Lessmore is a 2011 animated short film directed by William Joyce and Brandon Oldenburg, and produced by Moonbot Studios in Shreveport, Louisiana. Described as an "allegory about the curative powers of story," the film centers on bibliophile Lessmore and his custodianship of a magical library of flying books. It was created using computer animation, miniatures and traditional hand-drawn techniques. After winning over a dozen film festivals, the film was awarded the Best Animated Short Film at the 84th Academy Awards.