Cat in the Hat Party 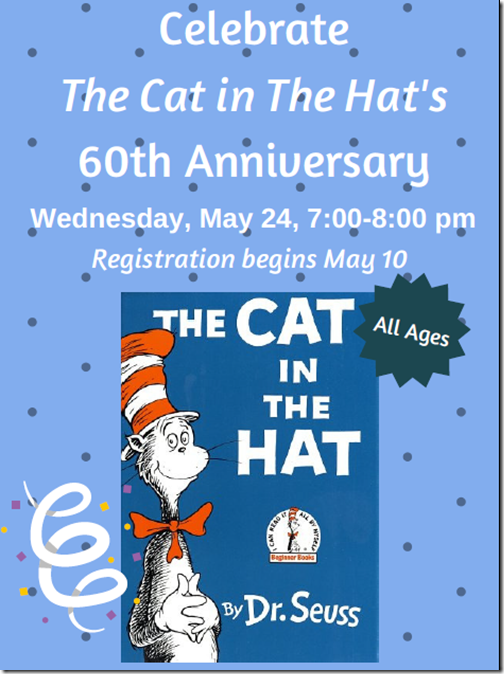 The Cat in the Hat is 60 years young this year and we're celebrating with all things Seussical! Fans of all ages are welcome to join us for stories, crafts, and games galore.
Music playing as children arrive: album “Seussical”
Greeted the children dressed in a Cat in the Hat Costume (Black pants & shirt, famous hat, white bib & bowtie, black fake-fur tail)
As kids arriving: had a table with nametags for them to fill out (helps with crowd control) and a table with Ellison die-cut “Cat in the Hat” hats (red hats, long white cardstock for headbands, white strips for gluing on hats, scissors & gluesticks) so each could make own hat for the program. Then directed them to two other stations:
Around 7:15, called everyone into storywell
Song/Movement --  a rousing “Silly Hat” song (Source Unknown):
On my head I wear a hat,
It is such a silly hat,
That my head will wiggle,
Wiggle to and fro,
Where else should my silly hat go?
...continuing with audience suggestions...e.g. elbow, knee, foot, chin, tail, eyes, ear, hand, bottom,belly, nose (pinched nose to sound funny)...ending with
In my lap I have a hat,
It is such a quiet hat,
That my lap won't wiggle,
It just stays flat,
What do you all think of that! (everyone sits down, hat goes back on my head)
This was a simplified version of the “Seussapalooza” program seen here: http://carolsimonlevin.blogspot.com/2014/03/seussapalooza-read-across-america.html adapted to be used in the main children’s space because the program room was unavailable.
5/25/2017 BWL

Carol as the “Cat in the Hat” with the cutest “One Fish, Two Fish, Red Fish, Blue Fish”!

Posted by Carol Simon Levin at 7:03 AM No comments: