Amazing Grace – Mary Hoffman  Grace loves acting out stories. Told by her classmates that she can’t play the part of Peter Pan because she’s a girl & black, she learns that she can do anything she puts her mind to.

Every-Day Dress Up – Selina Alko – A girl ditches her princess duds in favor of daring dames – Amelia Earhart, Ella Fitzgerald, Elizabeth Cady Stanton, Marie Carie & more. Briefly discussed each woman presented. (When I read this in person and get to Stanton, I mention women couldn’t even vote in the US until a little less than 100 years ago – had them figure out how old the US is (240 years) so for most of that time, women couldn’t vote. Long battle, Stanton and others spent their whole lives (70 years!) trying to get women’s voting rights.

“It is fun to dress up in princess skirts for dress up or a party, but how would they like to wear long heavy skirts (as heavy as a box of books!) everyday?  They couldn’t bike, or climb a tree, or run and play…”

You Forgot Your Skirt, Amelia Bloomer! --- Shana Corey –  Delightful biography of the suffragist & newspaper founder who founded a movement to get women out of long limiting skirts.

Who Says Women Can’t Be Doctors: The Story of Elizabeth Blackwell by Tanya Lee Stone -- In the 1830s, Elizabeth Blackwell refused to accept the common belief that women weren't smart enough or were too weak to be doctors. She wouldn't take "no" for an answer, was finally accepted at medical school and went on to become America's first female physician...paving the way for women doctors today. 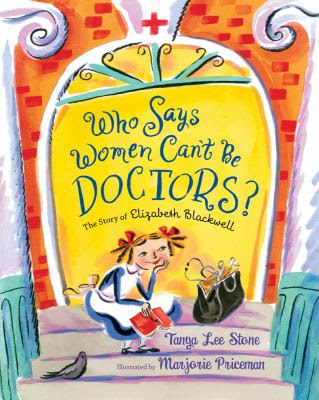 Nobody Owns the Sky: The Story of “Brave Bessie” Coleman – Reeve Lindbergh (youngest daughter of Charles) – No American flying school would teach Bessie because she was black so she sailed to France for lessons then returned to the states with the dream of starting her own school for African American pilots.

Movement – “Stretch High, Bend Low, Reach to the Sky, Then to Your Sides, Spread Your Wings, Turn around , then sit back down.”

Book: Rosie Revere, Engineer by Andrea Beaty   Rosie loves to invent until an uncle laughs at her cheddar cheese hat, but her Great-Aunt Rose (a tribute to the “Rosie the Riviters” of WW2) convinces her that inventions that fail are not failures….your brilliant first flop was a raging success…come on, let’s get busy and on to the next!…The only true failure can come if you quit.” 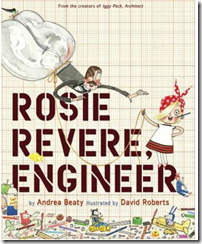 Fun related book: Iggy Peck, Architect by Andrea Beaty (2nd grade boy saves the day when his class is stranded on an island and he builds a suspension bridge.)

Speaking of architects, true story of unconventional architect Zaha Hadid
The World is Not a Rectangle by Jeannette Winter 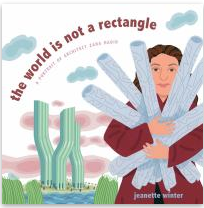 Finished with the new book from our national poet Laureate

Change Sings by Amanda Gorman -- As a young girl leads a cast of characters on a musical journey, they learn that they have the power to make changes—big or small—in the world, in their communities, and in most importantly, in themselves. 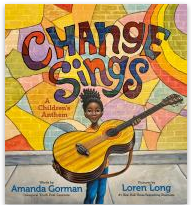 (As needed, did a variety of stretches and chants encouraging the kids to dream high & work hard to achieve their dreams)

Some other great titles:

An Equal Shot: How the Law Title IX Changed America by Helaine Becker
She Persited: 13 American Women Who Changed the World by Chelsea Clinton (and others in the series
Sky High: The True Story of Maggie Gee – Marissa Moss
My Name is Not Isabella: Just How Big Can a Little Girl Dream? – Jennifer Fosberry
To the Stars: The First American Woman to Walk in Space – Carmella Van Vleet
Wilma Unlimited – Kathleen Krull
Elizabeth Leads the Way:Elizabeth Cady Stanton and the Right to Vote – Tanya Lee Stone
I Could Do That: Esther Morris Gets Women the Vote – Linda Arms White
Solving the Puzzle Under the Sea: Marie Tharp Maps the Ocean Floor – Robert Burleigh

50 Children's Books About Mighty Girls & Women Around The World

Science Is For Girls: 30 New Children's Books About Girls and Women in Science

Girls Make It Work: 30 Books About Mighty Girls and Women in Engineering

Posted by Carol Simon Levin at 4:37 PM No comments: 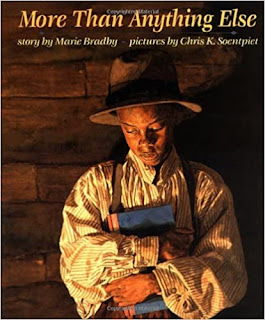 Read: More Than Anything Else by Marie Bradley (A fictionalized story about the life of young Booker T. Washington. Living in a West Virginia settlement after emancipation, nine-year-old Booker travels by lantern light to the salt works, where he labors from dawn till dusk. Although his stomach rumbles, his real hunger is his intense desire to learn to read. - Booker (great name, kids noticed!) was born into slavery, freed at age 9 with the end of the Civil War, age 16 walked 500 miles (equivalent of distance from Bedminster to Washington DC & back!)  to go to high school at Hampton Institute, later became a teacher and founder of the Tuskegee Normal School (a college for teachers) which later became Tuskegee University.) 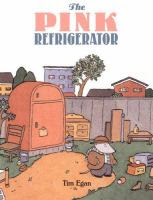 Read: The Pink Refrigerator by Tim Egan (Dodsworth does as little work as he can, collecting items from a junkyard and placing them in his thrift store for sale, until he happens upon a pink refrigerator that spurs him to do much more with his life.) 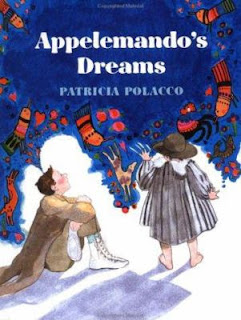 Read: Appelemando's Dreams by Patricia Polacco (with the war raging in Ukraine, I wanted to share this book on the power of dreams from the renowned Ukrainian/Russian author illustrator Patricia Polacco. Also discussed how this author/illustrator of over 50 books had dyslexia and felt "stupid" as a child because she couldn't read didn't learn to read herself until 5th grade when a teacher figured out how to help her, a story she tells in her book, Thank You Mr. Falker. Urged the 4th graders to look for Ms. Polacco's books at the library because, though they are in the E/Picture Book section, they have long texts and are geared much more toward older students like them.) 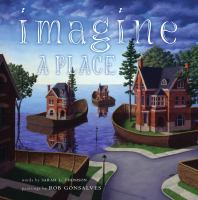 Read: Imagine a Place words by Sarah L. Thomson ; paintings by Rob Gonsalves (Mind-blowing illustrations accompany poems that urge the reader to think beyond the ordinary - the same author/illustrator pair created Imagine a Day and Imagine a Night.) 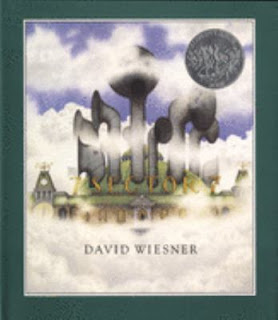 Read: Sector 7 – David Wiesner (visual storytelling -- telling a story without words. Wiesner is an author/illustrator local boy, grew up in Bridgewater NJ, Caldecott Medal winner, fun wordless fantasy of a boy who goes on an adventure with a cloud and makes quite a stir at the cloud factory.  Did you know there really is a cloud machine? Here’s a video.)  – mentioned they can find this and other books by this talented illustrator  in the Picture Book section.

Read: The Fantastic Flying Books of Mr. Morris Lessmore by William Joyce (and a 2011 Short Film) -- view here: https://www.dailymotion.com/video/x3yrl25 This is the story of a man and a magical library of flying books, and most of all, the power of stories in our lives. The film was awarded the Best Animated Short Film at the 84th Academy Awards. Read: If… by Sarah Perry (Imagine if cats could fly, leaves were fish, mice were hair, caterpillars were toothpaste, toes were teeth, or frogs ate rainbows…then imagine what else you can imagine!) 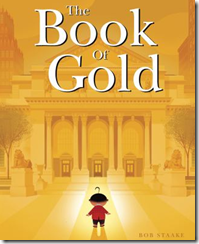 The Book of Gold by Bob Staake  (Isaac Gutenberg isn't a curious boy . . . that is, until he meets an old shopkeeper who tells him about The Book of Gold. This special book, hidden somewhere in the world, holds all the answers to every question and turns to solid gold when opened….) 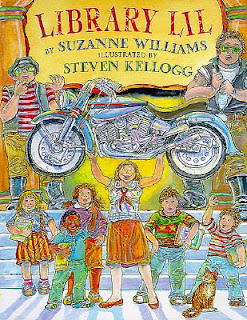 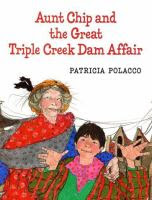 Aunt Chip and the Great Triple Creek Dam Affair by Patricia Polacco (A town has forgotten to read since the invasion of television...) 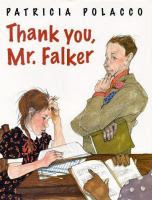 Posted by Carol Simon Levin at 4:21 AM No comments: 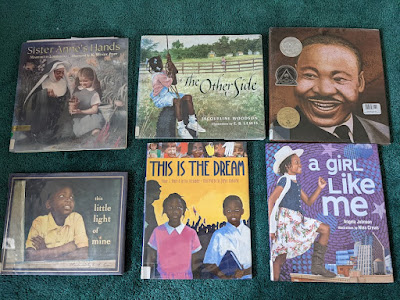 Opened by showing cover of Martin's Big Words by Doreen Rappaport - asked "Who is this?" "What did he do?" Ask if anyone knows who Ruby Bridges is?
Read Sister Anne's Hands by MaryBeth Lorbiecki (beautiful book about a the first black teacher to come to a school - show kids how to form heart with their hands, suggest make cards that way to share with the important people in their lives)
Sing: "Black and White" 1st verse
Read The Other Side by Jacqueline Woodson (two girls in a segregated town meet and find friendship atop the dividing fence)
Sing: "Martin Luther King had a Dream" (lyrics to this and other songs here: http://tinyurl.com/singalong-black-history-month)
Read: Martin's Big Words by Doreen Rappaport Sing: more verses of "Black and White"
Read: This is the Dream by Diane Z. Shore & Jessica Alexander (rhyming lines show the unfairness of segregation and the steps we have taken to progress to a fairer society)
Singable book: This Little Light of Mine, illustrated by E.B.Lewis
End with book about possibilities: A Girl Like Me by Angela Johnson, illustrated by Nina Crews
More Black History Month ideas: https://carolsimonlevin.blogspot.com/2014/03/school-age-storytimes-black-history.html
Additional book suggestons: https://www.whatdowedoallday.com/african-american-history-books-for-children/
Posted by Carol Simon Levin at 9:43 AM No comments: