We’ll share a story about the Empire State Building then build our very own skyscrapers.

As kids entered, they browsed books on structures and NYC – titles from: School Age Storytime: On this Spot: New York City & The Empire State Building–A Trip Through Time and “What’s K’NEX’t?”

Asked who had visited NYC?

Read: Top Job by Elizabeth Cody Kimmel (6-10 group only) (After other students in the class brag about their parents’ professions, narrator explains about her father’s job – changing the lightbulb on the top of the Empire State Building! --  Lots of math problem possibilities – fun to work out how tall the building is.   Trivia: Please Touch Museum image of  Statue of Liberty Torch made from toys!)

Booktalk: On this Spot: An Expedition Back Through Time J574.71 Goodman, Ding Dong Ding Dong by Margie Palatini, The Man Who Walked Between the Towers by Mordecai Gerstein, showed Sector 7 by David Wiesner.

Shared pictures, some poerms and structures from: Dreaming Up: A Celebration of Building by Christy Hale

Craft: Mini marshmallows and spaghetti to create structures.  Had them build on the 12x18 B&T cardboards, muffin cups to distribute marshmallows..  (Mini-marshmallows went a long way 5 bags for 80 kids! + 3 lbs. of spaghetti).  This is a tricky craft for the pre-schoolers (though fun- they love to nibble the marshmallows).  Straws and Connectors are easier for them to handle.

Posted by Carol Simon Levin at 2:37 PM No comments:

We’ll read books about baths & soap, then have soap bubble fun. Families with children of different ages are welcome to come all together to one program

Sing: “Take Me Out Of the Bathtub” title song from the book by Alan Katz
Read: Bubbles Float, Bubbles Pop by Mark Weakland (530.42 WEA) 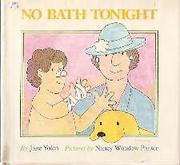 Read: Casey in the Bath by Cynthia DeFelice
Sing: “Take Me Out Of the Bathtub” title song from the book by Alan Katz
Read: Bubbles Float, Bubbles Pop by Mark Weakland (530.42 WEA)
(tried big book Bubble Trouble by Margaret Mahy – too long)

Outdoor stations with bubble wands – large commercial ones were fun as were shapes made out of pipe cleaners (hearts, diamonds, pyramids, cubes) . Tried some of the bubble blowers from Soap Science by J.L.Bell but many didn’t work with our bubble solution.  The Zubrowski (two straws with string run through and tied to make a rectangle) worked best when the string length between the straws was less than 6”.  Test solution and wands first next time.

Note: bubble solution from Dollar Store was useless – instead made up solution with dishwashing soap, water, and glycerin (could probably use corn syrup instead of glycerin , was afraid to use that over carpets but did all bubble play outside on the sidewalk beside the meeting rooms.)

Handout: Bubbles – from the Art and Science of Bubbles, Chicago Children’s Museum

Could also do this a bubble art – blow paint with straws – but we had done something very similar for the 4th of July.

Posted by Carol Simon Levin at 2:24 PM No comments:

Email ThisBlogThis!Share to TwitterShare to FacebookShare to Pinterest
Labels: Bathtime, Bubbles, Messy and Clean, SRC2016 On Your Mark Get Set Read

On Your Mark, Get Set…Engineer: Water Water Everywhere & Not a Drop to Drink! 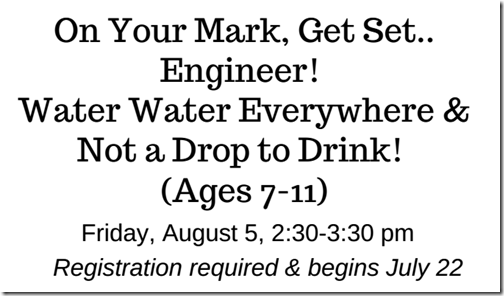 Join Civil Engineer Carrie Feuer P.E.  as we do hands-on explorations of how water goes from dirty to clean.

Display: books on engineering and on the water cycle.

Opening: Ask who attended http://carolsimonlevin.blogspot.com/2016/07/on-your-mark-get-setengineer.html.  Discussion what is an engineer?  What do engineers do?  Show engineering process diagram. 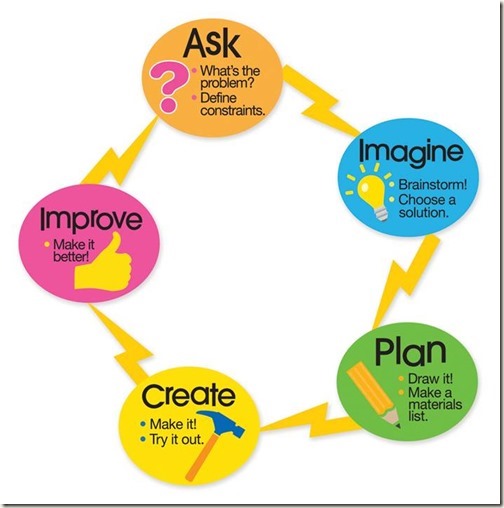 Read: All the Water in the World by George Ella Lyon

Introduce: Mrs. Feuer (“Foyer”) – she is a civil engineer who works with water – what would be the problem with water?  It gets dirty but we have to use it again – how?

2. Screen the water (rough garden screen to get out the big items  -- Carrie Feuer showed a bunch of things that should and shouldn’t be put down drains

4. Poured off the water, left solids in pail 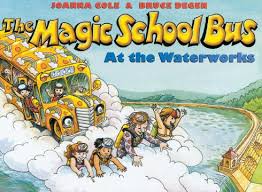 5. Added alum & chlorine* to clump solids and dis-infect, stirred for 5 minutes – while stirring read: The Magic School Bus at the Waterworks by Joanna Cole, finished with the last “experiment” in 11 Experiments That Failed by Jenny Offill.

*source of these chemicals?

Posted by Carol Simon Levin at 5:01 PM No comments:

Email ThisBlogThis!Share to TwitterShare to FacebookShare to Pinterest
Labels: Engineering, S.T.E.A.M., SRC2016 On Your Mark Get Set Read, Water 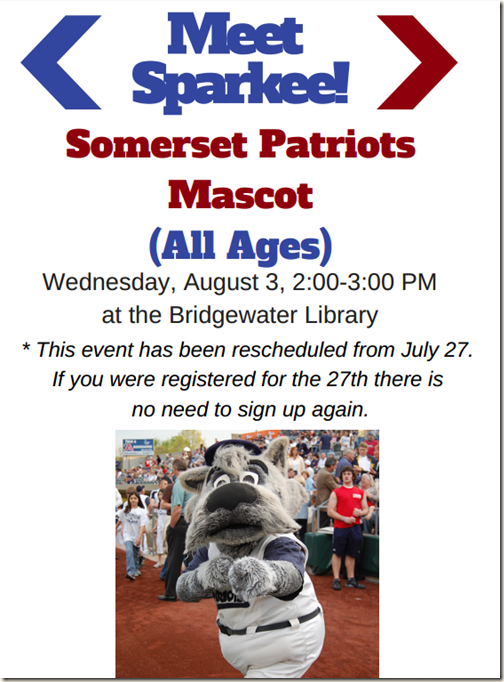 Join us for some baseball-inspired activities for the whole family, and a special visit from Sparkee, the mascot of the Somerset Patriots baseball team!

Opening music: “Take Me Out to the Ball Game” --Carly Simon (track #1 of CD from book below),  kids started doing crafts while I was awaiting confirmation that “Sparkee” had arrived in the building…

Gather together kids – sit down – who likes baseball? favorite team?

Read: Randy Riley’s Big Hit by Chris Van Dusen (omitted for MLK – they’d heard it Monday) a kid who strikes out but loves astronomy saves his town by designing a giant robot that hits that fireball back into outer space…

Meet and Greet with Sparkee

Read: Moon ball by Jane Yolen (A boy learns that he can hit a home run for his team the “all-stars” (made up of constellations!) when he remembers that "eye on the ball is all"))  -- Sparkee sat down to listen with the kids 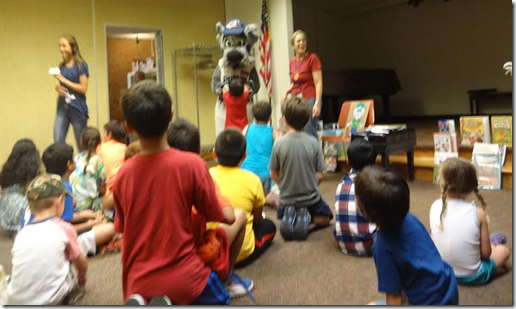 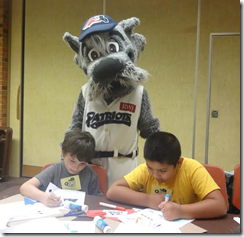 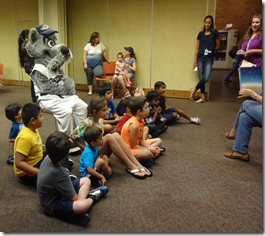 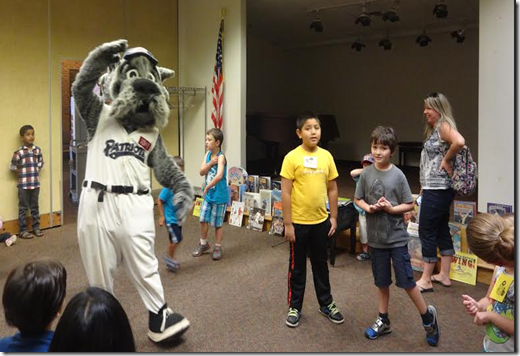 Posted by Carol Simon Levin at 4:43 PM No comments:

Play with Your Food -- Healthy Eating (Ages 3-6 & 6-10)
We’ll share some fun stories then make veggie art prints.
Families with children of different ages are welcome
to come all together to one program. 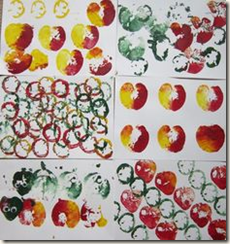 Opening Music: Don’t Play with Your Food! by the Dave Rudolf
Display:  food books by Lois Ehlert, Saxton Freyman and others for early arrivals to browse.

Opened by asking kids about their favorite foods

Read: Eating the Alphabet by Lois Ehlert (both groups) – fun to identify both familiar and unusual produce
Sing:  “I Like to Eat Apples and Bananas”  lyrics: http://www.songsforteaching.com/folk/applesandbananas.php

Sing (action song): “Chocolate Shake” – to get their wiggles out

Music playing while crafting: Don’t Play with Your Food! by the Dave Rudolf

Take Me Out to the Ballgame!

A fun, yet educational program, inclusive of African-Americans and
women in the sport, designed to help kids develop a sense of history and empathy
(ages 6-9)

”Music playing as they come in: “Take Me Out to the Ball Game” --Carly Simon sings in on track 1 on CD that accompanies book:

Show cover of Teammates by Peter Golenbook (J796.357 GOL), ask if anyone knows who is in the picture (Jackie Robinson) – then read this book which tells the story of the hostility Jackie received when he was the first to integrate the major leagues and how his fellow player “Pee Wee” Reese stood up for him.

Song (to tune "John, Jacob, Jingleheimer Schmidt" (clapping reduction) modified by Carol Simon Levin)
Jackie had a baseball ball and bat.
He loved to play all day.
Whenever he would play, the people all would say,
Jackie – make home base today!  La La La La La La!

Show cover of Mighty Jackie: The Strike Out Queen by Marissa Moss (JB MItchell). Ask what the kids notice (its a girl!) – read this book which tells the story of Jackie Mitchell, the girl who struck out Babe Ruth and Lou Gehrig!

Reprise song above with “he” changed to “she.”

“Did you ever daydream when you were supposed to be keeping your eye on the ball?...that’s what this story is about…”

Read: The Summer My Father was Ten by Pat Brisson – kids playing a pick-up baseball game end up ruining a garden in this story about making amends and intergenerational friends.

Finished with an exciting narrative of a single hit by Jackie Robinson – read: Stealing Home: Jackie Robinson Against the Odds by Robert Burleigh (JB Robinson) -- the book ends with the line: “…because this is Jackie Robinson and baseball (and America, too) will never again be quite the same.

Booktalked:  Eight Animals Play Ball – Susan Middleton Ely (bilingual) Song/Book: Take Me Out to the Ball Game, The Field Beyond the Outfield – Mark Teague,
Players in Pigtails – Shana Corey (Women's Professional Baseball League during WW2, the movie: A League of Their Own),  Girl Wonder – Deborah Hopkinson, Alex Rodriguez: Out of the Ballpark (also in Spanish) by Frank Morrison

Posted by Carol Simon Levin at 5:29 PM No comments: