Books on the sun, solar system, and eclipses available to browse as kids arriving (523.7’s, 520.78’s, Molly Bang “Sunlight” series. Showed some of the youtube videos (below).

Opened by asking what is happening next Monday? Eclipse...mentioned only partial here but still exciting -- announced we’d be doing stories and activities

Read:  (Ages 3-6:): The Sun is Always Shining Somewhere by Allan Fowler
(K-4th): Why Do Elephants Need the Sun by Robert E. Wells (midway demo - gave each kid a penny, told to hold in front of their face at arms-length - obscures friend’s nose -- now bring closer to eye, see how more of the face, even body of friend is hidden, same as airplane in sky far away looks small. Mentioned sun 400x larger than moon, but 400x further away --  so moon can obscure sun in eclipse if lined up properly) Good alternate title: The Sun: Our Nearest Star by Franklin Branley.

Demo (both groups) : Solar Pizza https://eclipse2017.nasa.gov/sites/default/files/NASA_Eclipse_Activity_Guide.pdf #7 -- had teen walk to the very back of the program room to show how long 65 feet was. 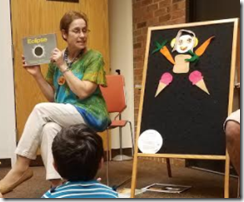 Book (both groups): Eclipse: Darkness in Daytime by Franklyn M. Branley (when it talked about the dragon eating sun, had kids make noises to “scare” dragon --  mentioned we have a coloring sheet later)

Song: Mr. Sun (variation on Raffi - hiding behind the moon, these little children are asking you…) (younger group only) 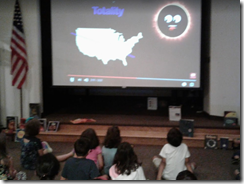 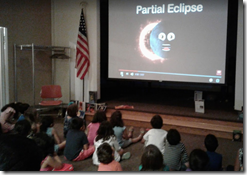 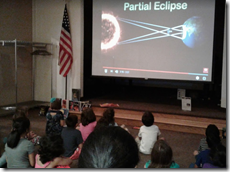 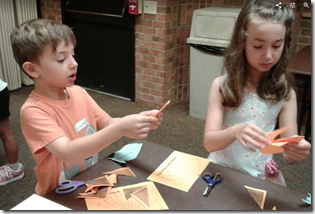 Use two pieces of cardboard. In one, cut a one-inch hole, then tape a piece of foil over the hole. Now make a pinhole in the middle of the foil. Use the other piece of cardboard (which should be white for best viewing) as a screen. With the Sun behind you, hold the pinhole cardboard as far from your screen as you can. The farther the pinhole is from the screen, the bigger your image will be.

Use your hands. Hold up both hands with your fingers overlapping at right angles. The holes between your fingers make pinholes.

Use a tree. If you have some shade trees in your location, try looking at the images of the Sun coming through the holes formed by the leaves. Use a piece of white cardboard to capture the images for a great viewing session!  (A colander also makes multiple images.)   www.eclipse2017.nasa.gov

Since the beginning of written human history, people have created tablets, monuments and other permanent records that send messages into the future. Often when a new building is dedicated, a stash of documents is hidden inside a foundation stone. This idea of communicating with future descendants eventually turned into specific messages placed into specially-designed to be open at some specific future date. The oldest time capsule opened recently was placed into a building cornerstone in 1795 by Paul Revere in Boston. It was opened in 2015 and the coins and newspapers it contained were donated to the Boston Museum of Fine Arts. In 1940 a time capsule was buried at Oglethorpe University in Atlanta. It is not to be opened until the year 8113 AD. It contains classic works of film and literature, as well as cultural odds and ends such as a typewriter.

You, too, can create your own time capsule to commemorate the August 21, 2017 total solar eclipse from wherever you happen to be. When might you want it opened? Perhaps on April 8, 2024 when the next total solar eclipse crosses the continental United States! How old will you be then? What do you think you would like your younger self to have sent to you across 7 years of time?

As you prepare the contents for your time capsule, think about how your letters and photos will be read by future technology. Printed materials are best, but electronic files require some special planning!

What would you include?

Where should I put it?

The basic idea is that you want to put your time capsule in some place where you will not be tempted to keep opening it up to take a peek or adding new things to it. You want it to be a glimpse of life at the time it was sealed up and not opened again until the To Be Opened date arrives.

Never look directly at the Sun without proper eye protection. You can seriously hurt your eyes and even go blind.

Projecting the Sun through a box projector, or using binoculars or telescope, or simply 2 pieces of card is a safe and easy way to view a solar eclipse.

The simplest and quickest way to safely project the Sun is with a projector made from only 2 pieces of card or paper.

The concept of a pinhole projector©timeanddate.com

What do you predict that the corona will look like for the August 21, 2017 eclipse?

On Aug. 21, 2017, the United States will experience a solar eclipse. Along a path 60 to 70 miles wide stretching from Oregon to South Carolina, observers will be able to see a total solar eclipse. Others across North America will see a partial eclipse.

To prepare for the big event, NASA wants you to predict what the corona will look like! Create a drawing, add a brief description and share it with us via www.flickr.com/groups/nasa-eclipse2017/ After the eclipse, compare your image to actual coronal images that will be uploaded there. Or Instagram using #Eclipse2017Corona.

For ideas on how to create your own coronal drawing, download the Eclipse Activity Guide (https://eclipse2017.nasa.gov/sites/default/files/NASA_Eclipse_Activity_G...) Activity 14: ECLIPSE CHALK ART.

Before the advent of photography, astronomers tried very hard to sketch the fleeting shape of our sun’s outer atmosphere called the corona. This ghostly halo of light had been seen for centuries by naked-eye observers at the height of most total solar eclipses, but little was known in the 1800’s about its shape and extent or how these changed with time. Here are some of the sketches that were made of the solar corona during the 1800’s, and it is pretty easy to see that the shapes are complicated and change from eclipse to eclipse.

Many more eclipse & space activities (including making a solar oven for s’mores) at: https://eclipse2017.nasa.gov/sites/default/files/NASA_Eclipse_Activity_Guide.pdf #14

Printable version of ideas above: https://docs.google.com/document/d/1HuMvVvlCieQIPU0iuoIeq3AXeWTMDHyydj2-q2__Cqo/edit?usp=sharing

As patrons finished - gave away Eclipse Glasses -- emphasized safety, could also use page 37 of https://eclipse2017.nasa.gov/sites/default/files/NASA_Eclipse_Activity_Guide.pdf

From our Watchung Library Branch: 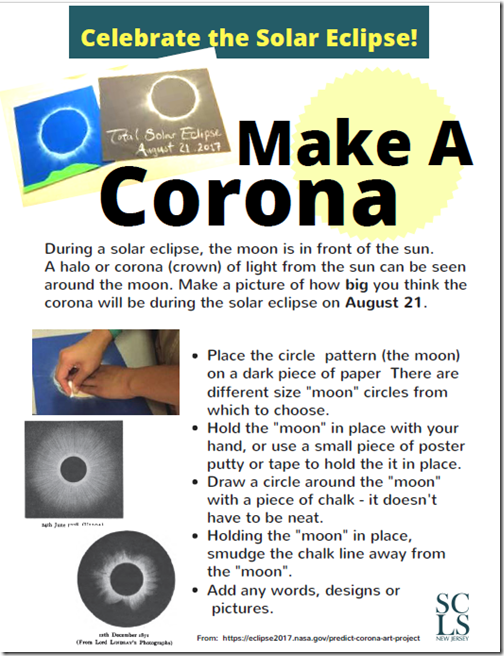