Picture This: Art Exploration For Kids: Gods in Color – New views of the Art of Ancient Greece 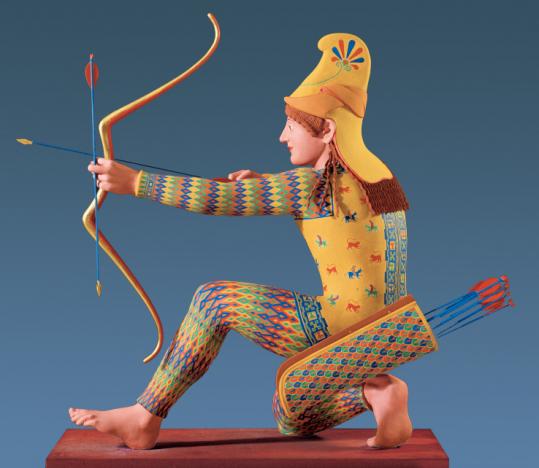 Picture This: Art Exploration For Kids: Gods in Color – New views of the Art of Ancient

“Travel back in time with us to Ancient Greece, meet the Gods from Mount Olympus, and hear about a surprising discovery scientists recently made about the sculptures there – then create a statue of your own! “
PowerPointpresentation available.

·        Mention even grown-ups surprised sometimes  – I went to an art museum in and discovered that Ancient Greek statues weren’t the white marble I’d always thought!  Research is ahead of most books – most of our Ancient Greek Art books don't show what scientists now know (Ancient Greek Art -- 709.38 Hodge, c2006 mentions it on some of the pages but has no pictures of the reconstructions, nor do any other books to my knowledge!)  Internet sights with pictures & information: http://harvardmagazine.com/2007/11/dazzlers-html

·       Powerpoint presentation featuring pictures from the “Gods in Color” exhibition.  Talk about how scientists discovered remnants of ancient pigments.

·       Craft: Have kids make Greek sculptures out of playdough (since we didn't have time to make sculpture one day and paint or color it the next, we used colored dough -- available very inexpensively at dollar stores).  Some kids sculpted free-form 3D statues, others made a freeze on a cereal box type cardboard base.  Others used the photocopied line drawings of Greek Statues (from the Museum's Family Guide) as a base and used flattened playdough to add pattern & color.  (If you have a multi-day program, you could have them sculpt one day and then paint or color the next day. -- Crayola Model Magic is one possibility for this.)

Music during craft (and while kids arriving): Mosaic: the Music of Greece (Nick Stoubis)


Painting of sculpture-- from Wikipedia

By the early 19th century, the systematic excavation of ancient Greek sites had brought forth a plethora of sculptures with traces of notably multicolored surfaces, some of which were still visible. Despite this, influential art historians such as Johann Joachim Winckelmann so strongly opposed the idea of painted Greek sculpture that proponents of painted statues were dismissed as eccentrics, and their views were largely dismissed for more than a century.
It was not until published findings by German archaeologist Vinzenz Brinkmann in the late 20th and early 21st century that the painting of ancient Greek sculptures became an established fact. Using high-intensity lamps, ultraviolet light, specially designed cameras, plaster casts, and certain powdered minerals, Brinkmann proved that the entire Parthenon, including the actual structure as well as the statues, had been painted. He analyzed the pigments of the original paint to discover their composition.
Brinkmann made several painted replicas of Greek statues that went on tour around the world. Also in the collection were replicas of other works of Greek and Roman sculpture, and he demonstrated that the practice of painting sculpture was the norm rather than the exception in Greek and Roman art.[4]Museums that hosted the exhibit included the Glyptotek Museum in Munich, the Vatican Museum, and the National Archaeological Museum in Athens, et al. The collection made its American debut at Harvard University in the Fall of 2007.[5]