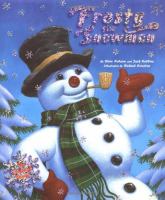 Singalong: Winter’s Day (All Ages)
Step inside the library for some fun and lively songs to warm away the wintry weather – and stick around for a musical indoor snowball fight! 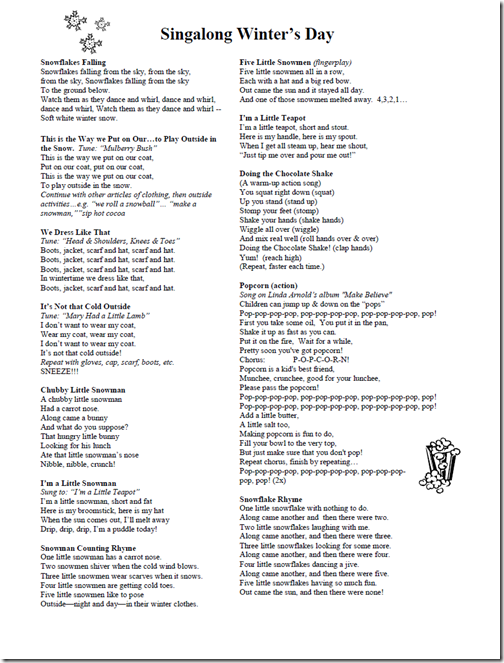 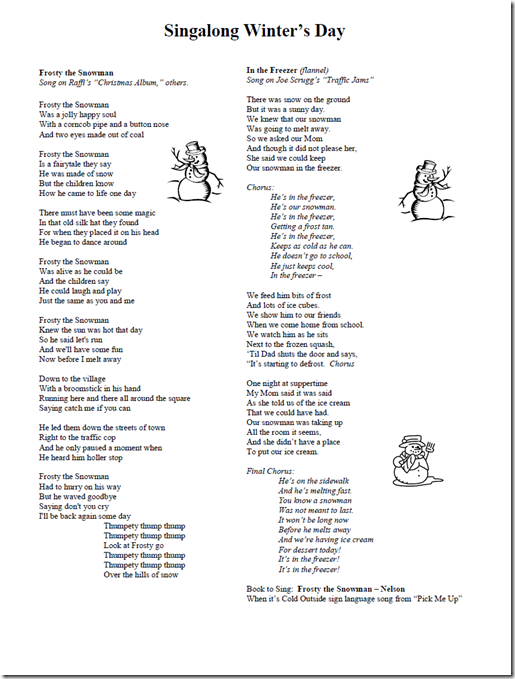 ”When it’s Cold Outside” sign language song from Pick Me Up: Fun Songs for Learning Signs

Chubby Little Snowman (flannel rhyme, bunny puppet)
A chubby little snowman
Had a carrot nose.
Along came a bunny
And what do you suppose?
That hungry little bunny
Looking for his lunch
Ate that little snowman’s nose
Nibble, nibble, crunch!

I’m a Little Snowman Tune: “I’m a Little Teapot”
I’m a little snowman, short and fat
Here is my broomstick, here is my hat
When the sun comes out, I’ll melt away
Drip, drip, drip, I’m a puddle today!

Five Little Snowmen (glove puppet fingerplay—counting down)
Five little snowmen all in a row,
Each with a hat and a big red bow.
Out came the sun and it stayed all day.
And one of those snowmen melted away. 4,3,2,1…

I’m a Little Teapot
I’m a little teapot, short and stout.
Here is my handle, here is my spout.
When I get all steam up, hear me shout,
“Just tip me over and pour me out!”

Book to Sing: Frosty the Snowman – Nelson
(various versions, I particularly like the one illustrated by Richard Cowdrey)

We feed him bits of frost
And lots of ice cubes.
We show him to our friends
When we come home from school.
We watch him as he sits
Next to the frozen squash,
‘Til Dad shuts the door and says,
“It’s starting to defrost. Chorus
One night at suppertime
My Mom said it was said
As she told us of the ice cream
That we could have had.
Our snowman was taking up
All the room it seems,
And she didn’t have a place
To put our ice cream.

Ending Activity: Snowball fight using plastic bag snowballs (find how to make them here), music “Sleigh Ride” on Now Christmas (disc 1, track 9), can follow with “Let it Snow” (track 10) or find them on Season’s Greetings can follow with Durante’s “Frosty the Snowman” for hand stamps.